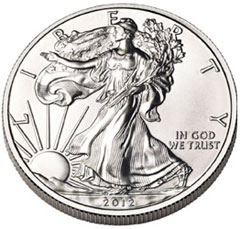 Authorized purchasers will be faced with a three week period during which there will be no American Silver Eagle bullion coins available to order from the United States Mint.

The Mint recently informed authorized purchasers that all remaining inventories of 2012-dated Silver Eagle bullion coins had sold out and no additional coins would be struck. Since the 2013-dated coins will not be available to order until January 7, 2013, this leaves a three week void for the Mint’s most popular bullion offering.

As with other bullion programs, the US Mint does not sell Silver Eagle bullion coins directly to the public, but distributes them through a network of authorized purchasers. The primary distributors are able to purchase the coins in bulk quantities at a price based on the market price of silver plus a fixed mark up. The coins are then resold to other bullion dealers, coin dealers, and the public.

The US Mint originally began accepting orders for the 2012 Silver Eagles from authorized purchasers on January 3, 2012. After a strong January, monthly sales trailed the levels of the prior year until October when demand started to move higher. In November, bullion sales continued their renewed strength, with sales of American Gold and Silver Eagles more than doubling the figures from the year ago period.

Sales figures published on the Mint’s website indicate sales of 1,403,000 of the one ounce Silver Eagle bullion coins for the month of December. Year to date sales have reached 33,510,500.