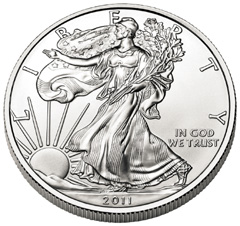 The United States Mint realized sales of more than 4 million troy ounces worth of silver bullion coins during the month of May 2011, representing the highest monthly total since January. Meanwhile, gold bullion sales were down slightly from the prior month and sharply lower than sales achieved in the year ago period.

The US Mint currently offers gold bullion coins in the form of 22 karat American Gold Eagles in 1 oz, 1/2 oz, 1/4 oz, and 1/10 oz sizes and 24 karat American Gold Buffalo coins in 1 oz size. Silver bullion coin offerings include the 1 oz American Silver Eagles and 5 oz America the Beautiful Silver coins. These bullion coins are distributed through a network of authorized purchasers who acquire the coins directly from the US Mint based on the market price of the metals plus a fixed or percentage mark up. The authorized purchasers then resell the coins to other bullion dealers, coin dealers, and the general public.

Across all options, silver bullion sales reached 4,160,500 troy ounces. The American Silver Eagle continues to be subject to the US Mint’s allocation program, which rations available quantities. However, the US Mint Mint did begin production and distribution of coins struck at the San Francisco Mint this month, which may have served to increase the available supply. Sales of the Olympic National Park America the Beautiful Silver Bullion Coins also began during the month.

In the prior month, silver bullion sales were 3,946,000 ounces. In the year ago period when only the Silver Eagles were available, monthly sales were 3,636,500.

May 2011 US Mint Bullion Coin Sales

Across all options, gold bullion coin sales measured 122,500 troy ounces. Earlier in the month, there were some premature reports from the mainstream media stating that monthly sales were heading for the highest total in more than a decade. Although orders were unusually heavy during the first week of the May, the final monthly total ended up lower than the previous month’s sales of 128,500 ounces.

In the year ago period, gold bullion sales were a whopping 260,500 troy ounces. At the time, this actually was the highest monthly total in more than a decade.