The United States Mint has announced a product limit of 300,000 units for the upcoming 2014 50th Anniversary Kennedy Half Dollar Silver Coin Collection. An ordering limit of five units per household will also be in place. The product will go on sale next week on Tuesday, October 28, 2014 at 12:00 Noon ET.

The set containing four 90% silver half dollars struck at different mint facilities with different finishes had previously been announced during the summer, without any indication of a product limit. 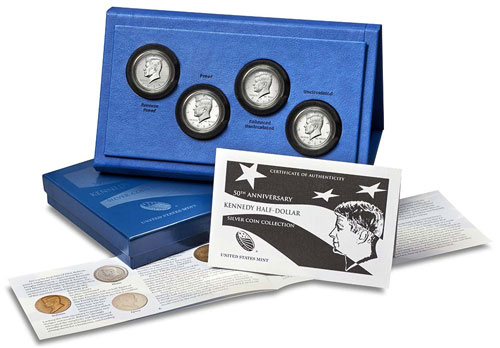 The US Mint has also issued to other products to mark the 50th anniversary of the Kennedy Half Dollar. On July 24, a set including two uncirculated clad composition half dollars featuring the original portrait design was released. The sets were initially offered without a stated product limit and an ordering limit of five per household. Still available priced at $9.95, the sets now carry a product limit of 200,000 units, with the household ordering limit still in place. Current sales have reached 134,631 units.

On August 5, 2014, the US Mint began sales of a three-quarter ounce gold proof coin featuring the original portrait design and a dual date of “1964-2014”. The coin carried an online and phone ordering limit of five coins per household and no stated product limit. The household ordering limit has since been removed, although the coin remains without a stated product limit. Current sales have reached 64,303 units.