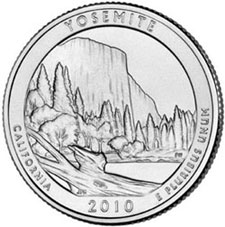 Sales figures for the recently released Yosemite National Park Quarter numismatic bags and rolls make their first appearance on the latest US Mint weekly sales report. Other products in focus include the popular 2010 annual coin sets and the available numismatic gold coin offerings.

The United States Mint began sales of the Yosemite Quarter bags and rolls last week on July 26, 2010. Through the reporting cut off date August 1, 2010, the Mint recorded sales of 23,416 of the two roll sets, 4,275 of the 100-coin bags from Philadelphia, and 4,187 of the 100-coin bags from Denver. These numbers are around 5% above or below the corresponding debut sales figures for the previous release of the America the Beautiful Quarters series, suggesting that a base level of demand may have been found.

In the latest week, the 2010 Proof Set added 54,637 units to bring the total sales to date to 351,016. The 2010 Mint Set added 22,778 units, bringing the total to 269,863. As mentioned in previous reports, these figures are well below comparable sales figures for the 2009 annual sets, possibly as the result of price increases and/or the extra interest that the 2009 Bicentennial Lincoln Cents generated for last year’s sets.

After last week’s jump, numismatic gold coin sales retreated to their typical recent levels. The 2010 Proof Gold Buffalo added 556 to bring total sales to 24,199. The First Spouse Coins sold 310 across all options. The highest selling coin this week was the uncirculated version of the Sarah Polk First Spouse Gold Coin, which sold 99 units.

The complete US Mint numismatic products sales report follows. All figures are compiled through August 1, 2010. The first number column indicates total sales through the reporting date and the second number column represents the change since the last report. Figures which are followed by an asterisk (*) are no longer available for sale at the US Mint.