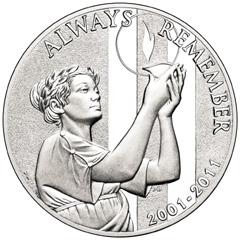 In this week’s United States Mint numismatic sales report, two new products make their debut while two other products have attained a sell out.

The First Spouse Gold Coins featuring Julia Grant went on sale June 23, 2011. In the opening days sales have reached 1,581 proof and 1,017 uncirculated coins for a combined total of 2,598. This outpaces the early sales for the last issue of the series featuring Eliza Johnson, which debuted with sales of only 2,108.

New numbers were not provided this week for the Yosemite National Park Five Ounce Silver Uncirculated Coins, however, the US Mint’s website indicates that orders are only begin accepted on a waiting list. This signals that orders have been received to fulfill the entire 27,000 mintage. As recently as last week’s sales report, sales for this release were tracking slower than the prior two issues, but the sell out ended up occurring slightly faster.

The 2010-P Abraham Lincoln Presidential Dollar rolls have recently sold out with last reported sales of 49,296 units. The Denver Mint rolls still remain available, but with sales at 48,833, a sell out might be close behind.

The full US Mint numismatic product sales report appears below. The figures are compiled through June 26, 2011. The first number column represents total sales through the reporting date, and the second number column represents the change in sales since the last report. Products listed in bold are new to this report. Products with sales followed by an asterisk (*) are no longer available from the United States Mint. Currently available US Mint products can be found online at http://catalog.usmint.gov/