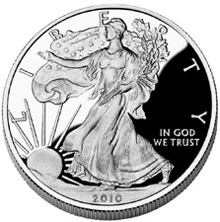 Sales of the 2010 Proof Silver Eagle began at the US Mint last week on November 19, 2010. This represented the first time in more than two years that a Proof Silver Eagle has been available to collectors directly from the Mint. Strong sales were widely expected, to the point that the product page warned about delays when placing orders during the first few hours of availability. The sales figures through November 21, 2010 came in at a somewhat underwhelming 273,212.

For a few points of comparison, the 2008 Proof Silver Eagle had debut sales figures of 185,232 units, and the more recently released 2010 Boy Scouts Silver Dollars had initial sales of 214,673. The 2010 Proof Silver Eagle topped both of these amounts, but probably not by the extent anticipated.

Other recent product releases include the Abraham Lincoln Presidential Dollar Rolls, with 33,471 (P) and 34,180 (D) rolls sold. These amounts are above the debut numbers of the previously released James Buchanan rolls by more than 10,000 each.

The Mount Hood National Forest Quarters made their first appearance with sales of 7,495 two roll sets and 1,543 and 1,465 of the 100 coin bags from the Philadelphia and Denver Mints, respectively. These numbers mark a unusually large drop from the last released Yosemite Quarter products. Is it possible that the email notification mix-up for subscription orders has impacted the figures the US Mint is reporting? This would also explain the 2010 Proof Silver Eagle figures.

The complete US Mint numismatic product sales report appears below. Figures are compiled as of November 21, 2010. The first number column represents total sales through the reporting date, and the second number column represents the change in sales since the last report.  Figures which are followed by an asterisk (*) are no longer available for sale from the United States Mint. Rows appearing in bold are for products making their debut on this report. Available US Mint products can be found online at http://catalog.usmint.gov/