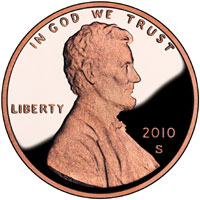 This weekly report of the United States Mint’s numismatic product sales includes the debut figures for the 2010 Proof Set. This annual set is usually the US Mint’s most popular product offering.

Last week’s report focused on the 2010 Mint Set, which went on sale July 15, 2010. In the past week, the US Mint added sales of 46,321 sets to bring the total to 247,085. This also represents a significant decline from the pace of sale established last year. In this case, it’s possible that the slower summer months are impacting comparisons since the 2009 Mint Set went on sale in October. However, the trend from other reports has clearly shown a slow down in US Mint product sales this year, particularly for products which underwent price increases.

Sales of available gold coins showed a jump in this report, likely due to the recent price decrease. The 2010 Proof Gold Buffalo added 799 to bring the total to 23,643. There were 538 of the First Spouse Gold Coins sold across all available options. This represented the highest weekly total in four weeks.

The full US Mint numismatic products weekly sales report appears below. Figures are compiled through July 25, 2010. The first number column indicates total sales through the reporting date and the second number column represents the change since the last report. Figures which are followed by an asterisk (*) are no longer available for sale at the US Mint.