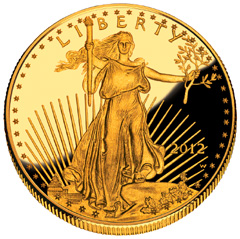 The 2012 Proof Gold Eagles went on sale April 19, 2012 with individual one ounce, half ounce, quarter ounce, and tenth ounce coins available, as well as a four coin set including one example of each coin. The coins feature Augustus Saint-Gaudens’ classic depiction of Liberty on the obverse with a family of eagles on the reverse designed by Miley Busiek. Proof versions of the coin have been struck for collectors for each year of the series with the exception of 2009.

Some collectors may be waiting until later this week to make their purchases. The US Mint’s numismatic gold products are priced based on the average market price of gold, with potential pricing adjustments on a weekly basis. It is likely that prices will be decreased by the equivalent of $50 per troy ounce of gold content later today.

Also making its debut on this week’s report is the America the Beautiful Three Coin Set featuring Chaco Culture National Historical Park, which opened at 10,666.

The complete US Mint numismatic product sales report appears below. The figures are compiled through April 23, 2012. The first number column represents total sales through the reporting date, and the second number column represents the change in sales since the last report. Products with sales followed by an asterisk (*) are no longer available from the United States Mint. Products listed in bold make their debut on this report. Currently available US Mint products can be found online athttp://catalog.usmint.gov/