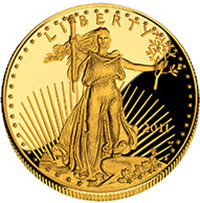 The first sales figures are available for the recently released 2011 American Gold Eagle Proof Coins, which is the highlight of the latest weekly US Mint numismatic product sales report. So far, the product is off to a slower start than the previous year.

The US Mint began accepting orders for the 2011 Proof Gold Eagles on April 21, 2011. Individual options were available for each of the four denominations, along with a multi-coin set. The release did not seem to garner as much enthusiasm as the 2010-dated coins, which were released following  an extended delay and one year cancellation of the series.

This week’s report also contains the first available numbers for the 2011 America the Beautiful Quarter Silver Proof Set. Although this product went on sale April 1, 2011, it had not been included on previous reports. Presently, sales are halted, along with all other Silver Proof Sets. The US Mint suspended sales of these products when the rising price of silver caused melt values to approach the issue prices.

The full report of US Mint numismatic product sales appears following. These figures are compiled through April 24, 2011. The first number column represents total sales through the reporting date, and the second number column represents the change in sales since the last report. Figures followed by an asterisk (*) are no longer available for sale from the United States Mint. Figures in bold make their debut on this report. Currently available US Mint products can be found online at http://catalog.usmint.gov/