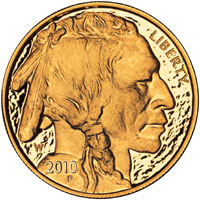 Numbers are mostly steady in the latest weekly report of the United States Mint’s numismatic product sales, with the exception of the newly released annual sets, which continue to slow. The 2010 Proof Gold Buffalo saw an increased level of sales compared to recent weeks.

The 2010 Proof Set added 34,551 units to bring the total sales to date to 385,567. The 2010 Uncirculated Mint Set added 13,184 to bring total sales to 283,047. These sales totals both remain below the debut sales figures for the comparable 2009 sets. If demand for these sets continues to be tepid, they may actually benefit from the resulting lower mintages when sales eventually conclude.

The 2009 District of Columbia & U.S. Territories Proof Set and Silver Proof Set are added back to this week’s report. These products from last year’s quarter program still remain on sale at the US Mint.

Sales of the 2010 American Veterans Disabled for Life Silver Dollar added 1,016 across both proof and uncirculated options. Following the sell out of the 2010 Boy Scouts Silver Dollars, these represent only commemorative coins available from the United States Mint for the remainder of the year.

The complete US Mint numismatic products sales report appears below. Figures are compiled through August 8, 2010. The first number column indicates total sales through the reporting date and the second number column represents the change since the last report. Figures which are followed by an asterisk (*) are no longer available for sale at the US Mint.