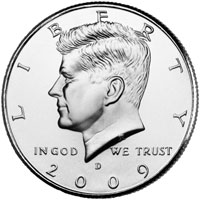 The latest weekly sales report for United States Mint numismatic products was again abbreviated by a holiday. However, most products showed a rise in sales from the low levels of the prior week.

The US Mint sold a combined 330 First Spouse Gold Coins. Of the available options, the Margaret Taylor First Spouse Coins sold 110 and 45 coins for proof and uncirculated coins, respectively. The remaining sales were divided amongst the Anna Harrison, Letitia Tyler, Julia Tyler, and Sarah Polk coins.

The most popular products by sales volume were the US Mint’s core 2009 annual set offerings. The clad proof set sold 8,946, the silver proof set sold 7,021, and the uncirculated mint set sold 10,351. Collectors may be placing some final orders for the 2009-dated sets before 2010 coins debut.

Sales ended for the 2009 Ultra High Relief Gold Coin during the weekly sales period, however updated sales figures were not provided by the US Mint. In last week’s report covering sales through December 27, 2009, the UHR Double Eagle had sold 112,065 coins. Sales officially ended on December 31, 2009 at 3:00 PM ET.

The complete report of United States Mint product sales figures is included below. Total sales for each product are compiled as of January 3, 2010. The first number column represents the total sales to date, and the second number column represents the change in sales since the last report. For lines indicated “NLA”, new sales figures were not provided.