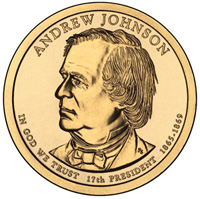 Following several weeks without a new release, the latest report of United States Mint numismatic sales report includes the debut figures for two products. Meanwhile, the pace of sales for the 2011 commemorative coins continues to settle.

The 2011 Native American Dollar rolls went on sale at the US Mint on March 28, 2011. Through the sales reporting date of April 3, the US Mint has recorded sales of 9,655 of the Philadelphia Mint rolls and 9,401 of the Denver Mint rolls. The numbers are about on par with sales figures for last year’s rolls. Despite a price increase and the availability of the same coins at face value through the Direct Ship program, collectors continue to pursue the numismatic packaged coins.

On March 31, sales of the Andrew Johnson Presidential $1 Coin Covers began. In the opening days, the US Mint recorded sales of 15,459 units out of the maximum production of 22,000. The Mint has lowered the production limit on the covers compared to the levels in place for previous releases of the series.

Sales for both the Medal of Honor and Army Commemorative Coins were lower compared to the previous week. As with most US Mint products, the majority of sales tend to take place immediately following the product release. After that point, the pace of sales declines until reaching a base level of demand. In the coming week, the pace of sales for the Medal of Honor Coins may fall at a faster rate, since the introductory pricing period has now ended.

The complete report of US Mint numismatic product sales appears below. The figures are compiled through April 3, 2011. The first number column represents total sales through the reporting date, and the second number column represents the change in sales since the last report. Figures followed by an asterisk (*) are no longer available for sale from the United States Mint. Figures in bold make their debut on this report. Currently available US Mint products can be found online at http://catalog.usmint.gov/