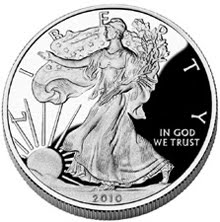 In the past week the 2010 Proof Silver Eagle and 2010 Proof Gold Eagle Four Coin Set have both sold out at the United States Mint. Another highlight of the latest numismatic sales report is the debut of the Abraham Lincoln Presidential Dollar Coin Cover.

Following the cancellation of last year’s offerings, collectors were enthusiastic about the release of the 2010 Proof Gold and Silver Eagles. The gold coins were offered starting on October 7 in four individual options with a separate four coin set available. Each option carried a stated maximum production limit. The Silver Eagle was available from November 19 in a single product option with no stated mintage limit.

In this report, the Abraham Lincoln Presidential $1 Coin Cover makes its debut at 23,373 units out of a maximum of 37,000. This is well above the opening sales of 16,620 for the last release of the American Presidency $1 Coin Cover series featuring James Buchanan. The other recently released Lincoln related product saw its sales nearly double from the last report. This is the Presidential $1 Coin & First Spouse Medal Set.

The full US Mint numismatic product sales report for the latest period appears below. Figures are compiled as of January 2, 2011. The first number column represents total sales through the reporting date, and the second number column represents the change in sales since the last report. Figures which are followed by an asterisk (*) are no longer available for sale from the United States Mint.  Lines appearing in bold are for products which debuted on this report. Available US Mint products can be found online at http://catalog.usmint.gov/