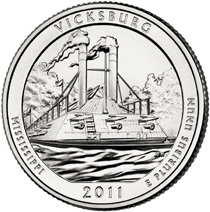 The latest United States Mint numismatic sales reports features the debut of another new product, the 2011 Uncirculated Mint Set. Meanwhile, the proof version of the 2009 James Buchanan’s Liberty Gold Coin has sold out, representing an unexpected development for the current gold offerings.

Sales of the 2011 Mint Set began on February 8, 2011, about five months earlier than last year’s comparable product. This year’s set includes a total of 28 coins from the Philadelphia and Denver Mints. Instead of the satin finish used in recent years, the coins included in the set feature a brilliant finish.

As mentioned, the James Buchanan’s Liberty First Spouse Gold Coin sold out during the weekly period. This was somewhat unexpected since total sales still had a ways to go before reaching the maximum mintage. Apparently the US Mint under produced the coin based on demand forecasts. The uncirculated version of the coin remains available for sale.

The recently released Army Commemorative Coins saw the pace of sales slow from last week. Typically, US Mint products experience their strongest sales in the week of release, after which point the pace of sales slows considerably. In the past week, the $5 gold coins sold 2,866, the silver dollars sold 20,061, and the half dollars sold 13,593, across proof and uncirculated versions.

The complete US Mint numismatic product sales report appears below. Figures are compiled through February 13, 2011. The first number column represents total sales through the reporting date, and the second number column represents the change in sales since the last report. Lines which appear in bold represent products which have debuted on this report. Figures which are followed by an asterisk (*) are no longer available for sale from the United States Mint. Currently available US Mint products can be found online at http://catalog.usmint.gov/