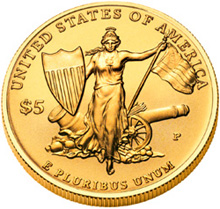 Several newly released United States Mint numismatic products make their debut on this week’s sales report. This is highlighted by the 2011 Medal of Honor Gold and Silver Coins, which represent the second of two commemorative coin programs for this year. Other new products include the Andrew Johnson Presidential Dollar Rolls and 2011 Presidential $1 Coin Proof Set.

The difference is partially explained by the shorter debut period for the Medal of Honor Coins, which went on sale on a Friday, meaning initial sales cover only two days. The Army coins went on sale Monday, resulting in almost a full week of sales include in the initial figures. A long road remains ahead for both offerings, which are expected to remain available for sale until pre-announced date near the end of the year.

Andrew Johnson Presidential Dollar rolls started with sales of 23,211 Philadelphia Mint rolls and 22,523 Denver Mint rolls. This is down about 50% compared to the initial figures for the numismatic rolls of the previous issue of the series featuring Abraham Lincoln. However, the numbers are about even with the initial figures for next previous issue featuring James Buchanan. Numismatic products featuring Lincoln tend to be very popular with collectors.

The 2011 Presidential Dollar Proof Set began with sales of 163,129. This is down significantly from the opening sales for last year’s comparable product at 22,426. The 2010 set was released ahead of the full annual set and included the first appearance of the Abraham Lincoln Presidential Dollar. It had also been priced $4 lower.

The full US Mint numismatic product sales report appears below. Figures are compiled through February 27, 2011. The first number column represents total sales through the reporting date, and the second number column represents the change in sales since the last report. Lines which appear in bold represent products which have debuted on this report. Figures which are followed by an asterisk (*) are no longer available for sale from the United States Mint. Currently available US Mint products can be found online at http://catalog.usmint.gov/