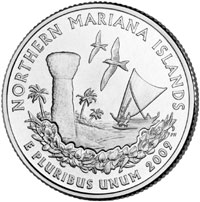 Debuting on this sales report is the Zachary and Margaret Taylor Coin and Medal Set, which went on sale December 17, 2009. The opening sales registered at 2,702.

An interesting trend emerging is the increase in sales for coins with confirmed or expected low final mintages. The best example of this is the 2009-P Northern Mariana Islands 1000-coin bags. These have outsold the 1000-coin bags from Denver by nearly two to one. The likely reason- earlier this month, the final mintage for the 2009-P NMI Quarter was shown to be the lowest for an individual quarter in several decades. Similarly, sales of the 2009 Lincoln Cent Presidency Two Roll Set are outpacing sales of the Professional Life Set by a wider margin than last week. The Presidency design is widely expected to have the lowest mintage of the four different designs released this year.