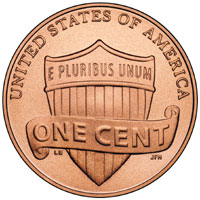 The debut sales figures for the recently released 2010 Lincoln Cent Two Rolls Set are available as part of this week’s US Mint sales report. Other highlights include an increase in First Spouse Gold Coin sales and the latest numbers for the popular 2010 Boy Scouts Silver Dollar.

The 2010 Lincoln Two Roll Set was released on April 8, 2010. Through the sales report cut off date of April 11, 2010, the US Mint has sold 45,483 sets. This represents a sharp decline from the sales levels for the 2009 Lincoln Cent Two Roll Sets, which were released for each of the four different designs. The set for the Presidency design had sold 153,427 units in the debut sales period.

The timing of the 2010 Lincoln Cent offering was unfortunate and likely led to the reduced sales levels. The first of the newly designed cents had been appearing in circulation since mid-January, and the official launch ceremony was held on February 11, 2010. If the two roll set had been available sooner, some of the early excitement surrounding the new design might have translated into higher sales.

First Spouse Gold Coin sales saw an increase from recent levels, with 1,238 coins sold across all available options. The increase sales are likely due to an anticipated pricing increase, which is expected to take place mid-morning tomorrow. Also of note, sales of the Abigail Fillmore First Spouse Gold Coins are now nearly at the levels of the prior Margaret Taylor release.

The complete United States Mint weekly sales report appears below. Figures are compiled through April 11, 2010. The first number column indicates total sales through the reporting date and the second number column represents the change in sales since the last report. Figures which are followed by an asterisk (*) are no longer available for sale at the US Mint.