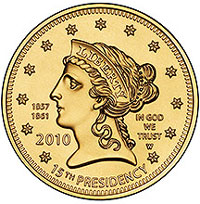 The James Buchanan’s Liberty Gold Coins went on sale at the US Mint on September 2, 2010 with the uncirculated versions priced at $766 and the proof versions priced at $779. Through the sales reporting date of September 5, 2010, orders for 3,641 proof coins and 2,486 uncirculated coins have been received. The combined total of 6,127 represents more than 40% of the maximum authorized mintage of 15,000 coins.

These figures also represent the strongest initial sales of an issue of the First Spouse Gold Coin series in at least a year. There was more excitement than usual surrounding this release due to the classic Liberty design and the fact that the coin completes the “Liberty subset” composed of the four issues of the First Spouse Coins series that carry classic designs. Another factor may be the absence of other collectible gold offerings from the US Mint, although recent news indicates that 2010 Proof Gold Eagles will soon be available.

Another notable product on this week’s report is the 2010 Silver Proof Set. After debuting last week with sales of 241,656 sets, orders received for this week were just 46,887. This amount still exceeded the weekly sales for the regular clad 2010 Proof Set, which was released earlier this year on July 22.

The complete weekly US Mint numismatic product sales report follows.  All figures are compiled through September 5, 2010. The first number  column represents total sales through the reporting date and the second  number   column represents the change in sales since the last report.  Figures which are followed by an asterisk (*) are no longer available  for sale at the US Mint.