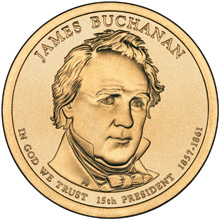 This week’s report of United States Mint numismatic product sales includes the debut of the James Buchanan $1 Coin Cover. Other areas of focus are the currently available gold coins, as the price of gold continues to push to new highs and the US Mint prepares to offer the eagerly awaited 2010 Proof Gold Eagles.

The James Buchanan Presidential Dollar Coin Covers went on sale September 30, 2010. Within the opening days of sales, orders have been received fro 16,220 units. Following through with the trend, this figure comes in below the debut figures for the previously released Franklin Pierce Coin Covers.

Sales of the 2010 Proof Gold Buffalo came in at 1,459 for the week, bringing the total sales to 35,110. The US Mint had recently announced the sell out of the bullion version of the coin, but so far this hasn’t translated into higher sales for the collector coins.

First Spouse Gold Coins added sales of 868 during the period, slightly exceeding total sales from the previous report. Purchases continue to be focused on the Margaret Taylor coins, which are expected to conclude sales on December 2, and the James Buchanan’s Liberty Gold Coins, which feature a classic depiction of Liberty by Christian Gobrecht.

The full US Mint numismatic product sales report follows. Figures are compiled as of October 3, 2010. The first number  column represents total sales through the reporting date, and the second  number column represents the change in sales since the last report.  Figures which are followed by an asterisk (*) are no longer available  for sale at the US Mint.