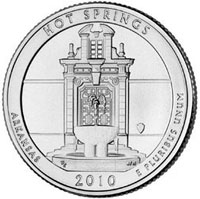 The debut sales figures for the United States Mint’s numismatic bags and rolls offerings for the Hot Springs National Park Quarter are the highlight of this week’s sales report. The latest numbers for the 2010 Boy Scouts of America Centennial Silver Dollars are also noteworthy. Even though total combined sales have not reached the maximum authorized mintage, one version of the coin was recently moved to waiting list status.

The Hot Springs Quarter is the first coin of the new America the Beautiful Quarters Program. On April 19, 2010 the US Mint began offering packaged bags and rolls of the coins for sale to collectors. Through the reporting date of April 25, 2010, the Mint has recorded sales of 5,268 of the 100-coin bags from the Philadelphia Mint, 4,915 of the 100-coin bags from the Denver Mint, and 25,983 of the two roll sets.

These figures surpass the opening bags and rolls sales figures for the previous Northern Mariana Islands Quarter, which had opening sales of 4,160, 4,069, and 18,817 for the comparable products. This suggests a wider collector base for the new 12 year series featuring National Parks than the previous one year series featuring U.S. Territories and the District of Columbia. Comparisons aren’t so favorable against the 50 State Quarters Program. I tracked down debut sales figures for some of the bags and rolls products for 2008 quarters and found them to be roughly double the levels achieved by the new Hot Springs Quarter.

The Boy Scouts Silver Dollars added sales of 17,949 over the past week. This continues the slow down in the pace of buyers, likely influenced by the end of introductory pricing. The combined sales total is now 330,602, or 19,398 away from the maximum authorized mintage of 350,000. Nonetheless, the uncirculated version of the coin was put waiting list status late last week. This means that the US Mint has received orders to sell the remaining inventory, but customers can still place orders to be added to a waiting list, which will be fulfilled on a first come, first served basis with any coins available due to order cancellations. The proof version of the coin remain available for regular ordering.

The full weekly sales report appears below. Figures are compiled through April 25, 2010. The first number column indicates total sales through the reporting date and the second number column represents the change in sales since the last report. Figures which are followed by an asterisk (*) are no longer available for sale at the US Mint.