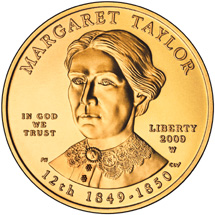 A drop off in sales was expected for the 2010 Proof Gold Eagles, which debuted on last week’s report. Newly released US Mint products tend to have their highest sales performance during the opening days. Subsequently, the pace of sales declines, often sharply, until a base level of weekly demand emerges. In the current period, customers ordered 5,215 (1 ounce), 706 (1/2 ounce), 669 (1/4 ounce), 1,593 (1/10 ounce), and 2,840 (4 Coin Sets). The largest drop off in sales compared to the prior week occurred for the 1/10 ounce individual option. On an overall basis, the number of ounces worth of 2010 Proof Gold Eagles sold by the Mint was 11,148 this week, compared to 29,678 for the last report.

The complete report of US Mint numismatic product sales appears in the table below. Figures are compiled as of October 17, 2010. The first number column represents total sales through the reporting date, and the second number column represents the change in sales since the last report.  Figures which are followed by an asterisk (*) are no longer available for sale from the United States Mint. Other products can be found online at http://catalog.usmint.gov/