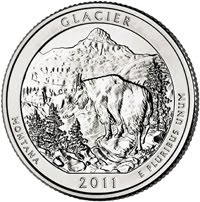 In the latest weekly report of United States Mint numismatic product sales, the opening figures for the Glacier National Park Quarter bags and rolls are available. Another area of interest are some updated numbers for previously sold out First Spouse Gold Coins.

The US Mint began sales of the 2011 Glacier National Park Quarter numismatic bags and rolls on April 4, 2011. Though the sales reporting date of April 10, sales had reached 19,927 of the two roll sets, 2,697 of the 100-coin Philadelphia bags, and 2,655 of the 100-coin Denver bags. These figures are down from the opening achieved for the previous Gettysburg National Park Quarter products during a shorter initial period. The two roll sets are down about 4.5%, while the 100-coin bags are about 18% each.

Numbers for the 2010 First Spouse Gold Coins saw a lot of movement. The uncirculated versions of the Abigail Fillmore and Jane Pierce coins saw cumulative sales totals adjusted lower by 98 and 158 coins, respectively. Both of these coins had sold out more than two weeks ago. The reduced sales numbers may draw the interest of collectors, particularly for the Jane Pierce coin.

The uncirculated Buchanan’s Liberty Coin moved higher by 170 coins. As of today, this coin is now listed as sold out on the US Mint’s website, representing the fifth of the eight 2010 releases to sell out. Finally, the uncirculated Mary Todd Lincoln coins moved significantly higher by 476 units.

The complete report of US Mint numismatic product sales appears below. The figures are compiled through April 10, 2011. The first number column represents total sales through the reporting date, and the second number column represents the change in sales since the last report. Figures followed by an asterisk (*) are no longer available for sale from the United States Mint. Figures in bold make their debut on this report. Currently available US Mint products can be found online at http://catalog.usmint.gov/