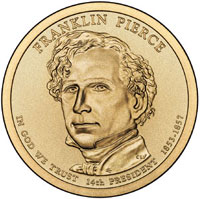 The latest weekly report of the United States Mint’s numismatic product sales includes the debut numbers for the latest roll offering of the Presidential Dollar series and follow up numbers for the recently released America the Beautiful Quarters Proof Set. Other highlights include updates for First Spouse Gold Coins and the 2010 Commemorative Coin Programs.

Franklin Pierce Presidential Dollar Rolls went on sale at the US Mint on May 20, 2010. In the debut period, sales of 23,960 of the Philadelphia Mint rolls and 24,160 of the Denver Mint rolls were recorded. These amounts are 2,048 and 1,261 behind the debut figures for the previously released rolls featuring Millard Fillmore, suggesting that collector’s attention may have faded.

Sales of the recently released 2010 America the Beautiful Quarters Proof Set have already slowed down significantly. After debuting on last week’s report with sales of 75,558, only 18,391 sets were added in this week’s report, bringing the total sales to 93,949. The silver version of the set is scheduled to go on sale later this week.

The US Mint’s sales of First Spouse Gold Coins slowed considerably this week, except for the Margaret Taylor uncirculated coins, which showed an usual 278 coins sold in the latest week. The total sales for the uncirculated coin are now back ahead of the subsequently issued Abigail Fillmore First Spouse Coins.