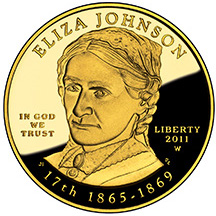 The Eliza Johnson First Spouse Gold Coins went on sale at the US Mint on May 5, 2011. Through the reporting date of May 8, US Mint recorded sales of 1,331 proof coins and 777 uncirculated coins, for a total of 2,108 across both options. This represents the slowest start for an issue of the one-half ounce 24 karat gold coin series since 2009. Last year’s releases had debut sales figures of 2,881 for Abigail Fillmore, 2,434 for Jane Pierce, 6,127 for James Buchanan’s Liberty, and 5,505 for Mary Todd Lincoln. The low initial sales for the Eliza Johnson coin may have been partially attributable declining gold price, which caused some buyers to delay purchases in hopes of lower prices. So far, it doesn’t seem like a product price decrease will occur for the current week.

The 2011 Proof Gold Eagles saw sharply lower sales, perhaps for the same reason. The numbers for each of the product options were down from 74% to 87% from the levels seen in the prior week. Commemorative gold and silver coin sales also showed declines, but to a lesser extent.

The 2010-P Hot Springs National Park Five Ounce Uncirculated Coins are only a whisper away from selling out, with orders placed for 26,866 coins out of the total 27,000 mintage. When sales began on April 28, the flood of initial orders took down the US Mint’s website. The next numismatic release for the five ounce silver coins will take place on May 17.

The full report of US Mint numismatic product sales appears below. The figures are compiled through May 8, 2011. The first number column represents total sales through the reporting date, and the second number column represents the change in sales since the last report. Figures followed by an asterisk (*) are no longer available for sale from the United States Mint. Figures in bold make their debut on this report. Currently available US Mint products can be found online at http://catalog.usmint.gov/