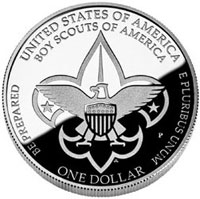 This week’s US Mint sales report includes the debut numbers for the popular 2010 Boy Scouts of America Centennial Silver Dollars. As a sell out for this product is widely expected, the opening sales figures have been awaited for an indication of just how soon this might occur.

Another product new to the sales report is the Presidential $1 Coin & First Spouse Medal Set featuring Millard and Abigail Fillmore with initial sales of 2,362. This represents the first release for the product type following a $3 price increase. The prior Presidential $1 Coin and First Spouse Medal Set featuring Zachary and Margaret Taylor had debuted with sales of 2,702. Are the US Mint’s customers displaying some restraint as a direct result of the price increase?

The complete US Mint sales report appears below. Figures are compiled through March 28, 2010. Starting this week, products which are no longer available from the US Mint will continue to appear on the reports with the last reported sales figures followed by an asterisk (*). As usual, the first number column of the report indicates total sales to date and the second number column represents the change in sales since last week’s report.