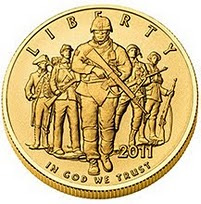 The Army Commemorative Coins went on sale January 31, 2011. The US Mint offered each coin for sale individually, with no multi-coin sets or other packaged collector products available. There were no household ordering limits imposed, and coins carried discounted introductory pricing, which will remain in effect until March 2, 2011.

Last year, the US Mint had offered two commemorative coin programs, which included only silver dollars. The 2010 American Veterans Disabled for Life Silver Dollars had debuted with combined sales of 98,358. The 2010 Boy Scouts of America Centennial Silver Dollars had recorded initial sales of 214,673. In total, the US Mint would sell 267,740 and 350,000 for each of the programs, respectively.

The complete US Mint numismatic product sales report follows. Figures are compiled through February 6, 2011. The first number column represents total sales through the reporting date, and the second number column represents the change in sales since the last report. Lines which appear in bold represent products which have debuted on this report. Figures which are followed by an asterisk (*) are no longer available for sale from the United States Mint. Currently available US Mint products can be found online at http://catalog.usmint.gov/