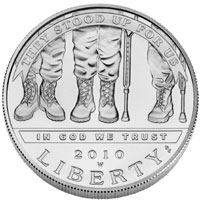 This week’s US Mint sales report includes the debut figures for the most recently released Presidential Dollar product and potentially the last sales figures for the D.C. & U.S. Territories Quarters First Day Coin Covers. Another highlight of the report is the uptick in demand for the American Veterans Disabled for Life Silver Dollars.

The Presidential $1 Coin & First Spouse Medal Set featuring Franklin and Jane Pierce makes its first appearance on this sales report. The product went on sale June 24, 2010 and only managed to sell 1,340 units in the opening days. This is a sharp drop from the initial sales figures for the prior release featuring Millard and Abigail Fillmore, which sold 2,362 units by its first appearance on the report.

The First Day Coin Covers for the District of Columbia, Puerto Rico, Guam, American Samoa, U.S. Virgin Islands, and Northern Mariana Islands Quarters continue to show elevated interest during the final days of availability. Sales will officially end on June 30, 2010 at 5:00 PM ET. The products have low production runs when compared to other First Day Coin Covers and represent the final coin covers to be issued for quarters for the foreseeable future.

American Veterans Disabled for Life Silver Dollars showed an increase in demand this week with a combined 5,243 coins sold across both proof and uncirculated versions. In recent weeks, sales have been between 1,200 to 2,000 per week. The combined sales to date have now reached 214,808 out of the 350,000 maximum authorized mintage. If sales do not reach the maximum, which seems likely based on the current trend, the US Mint would conclude sales at a pre-announced date in December.

The complete weekly sales report appears below. The figures are compiled through June 27, 2010. The first number column indicates total sales through the reporting date and the second number column represents the change in sales since the previous report. Figures followed by an asterisk (*) are no longer available for sale at the US Mint.