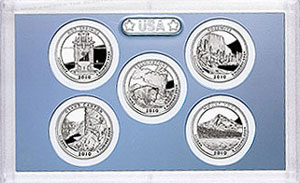 The US Mint sold 841 First Spouse Gold Coins in the latest week, representing the highest total in a month. The heaviest sales were skewed towards the recent releases and the proof versions of the coins. In the middle of the weekly reporting period, the US Mint had raised prices for the coins to their highest levels ever. Some customers may have placed larger orders ahead of the increase to take advantage of the lower prices.

On the commemorative coin front, sales of the American Veterans Disabled for Life Silver Dollar crossed the 200,000 mark this week, after adding 1,390 proof coins and 600 uncirculated coins. This program has a combined maximum authorized mintage of 350,000. The Proof Boy Scouts Silver Dollars continue to creep closer to a sell out. The program also has a maximum authorized mintage set at 350,000 and has now sold 342,771 coins.

The 2010 American the Beautiful Quarters Proof Set went on sale May 13, 2010. Through May 16, 2010, sales of 75,558 sets have been recorded. Interestingly, this comes in far behind the initial sales figures for the 2010 Presidential Dollar Proof Set, which had recorded initial sales of 224,426 units.

The full weekly sales report appears below. Figures are compiled through May 16, 2010. The first number column indicates total sales through the reporting date and the second number column represents the change in sales since the last report. Figures which are followed by an asterisk (*) are no longer available for sale at the US Mint.