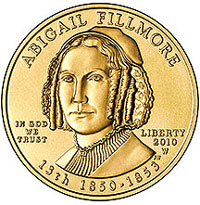 The Abigail Fillmore First Spouse Coins went on sale at the US Mint on March 18, 2010. This represented the first release of the year for the one-half ounce 24 karat gold coin series. As a big change from prior releases, the maximum mintage was set at 15,000 coins across both options, instead of the previously used maximum of 40,000. In addition to the current release, the maximum mintages for all of the 2010 releases have been set at lower levels.

So far this has failed to make much of an impression with buyers. The US Mint recorded opening sales of 1,824 proof coins and 1,057 uncirculated coins. This makes for a combined total of 2,881, or about 19% of the maximum.

The 2010 American Veterans Disabled for Life Silver Dollar added 12,432 more coins in the latest week. The combined total across both proof and uncirculated versions has now reached 166,368 out of the maximum authorized mintage of 350,000. The 2009 Proof Gold Buffalo coins added 394 to bring the total to 49,388.