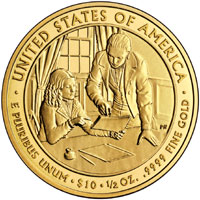 Last week it seemed that the United States Mint should have reduced the prices for available numismatic gold coins based on a reading of their pricing policy. A notification published in the Federal Register documented a specific procedure by which the average of London Fix prices for a specified period would drive pricing changes. Applying this procedure would have resulted in a price decrease for the available First Spouse Gold Coins.

For more than a year, price changes have always followed the calculated average of the nine fix prices mentioned in the published policy. So apparently, this week was the first time that the internal policy guided the pricing determination.

The statement provided by the Mint follows:

On January 12, 2009, the United States Mint adopted a pricing policy which allows them to adjust prices for their numismatic gold and platinum products in order to mitigate the effect of the fluctuating prices of precious metals. The new policy was adopted to ensure that the United States Mint is able to recover all costs associated with gold and platinum products, while keeping changes in prices to a minimum. The new methodology is based primarily on the London Fix weekly average (using the nine fixes beginning Thursday morning and ending with the following Wednesday morning fix).

During the week that ended with the AM fix of May 26, 2010, the weekly average fell below the range that was in effect on that date. However, the Wednesday PM fix was within the range currently in effect, so the prices were not dropped.

When the new pricing policy was first introduced, the United States Mint Deputy Director stated, “Transparency, agility, and customer service are the catalysts for our new pricing method.” Having an unrevealed internal policy which can override the published policy doesn’t seem consistent with the claim of transparency.

Going forward, collectors who have been calculating the weekly average precious metals prices to aid in purchasing decisions will have another factor to consider.