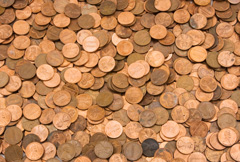 Late last year Congress enacted the Coin Modernization, Oversight, and Continuity Act of 2010 (Public Law 111-302). This provided the Secretary of the Treasury with the authority to conduct research and development for alternative coinage materials and required a biennial report to be prepared on the production costs and cost tends of circulating coins. The Secretary subsequently delegated this authority to the United States Mint.

The US Mint requested public comment from all interested parties on factors to be considered as they conduct their research on alternative coinage materials.

These factors include, but are not limited to, the effect of new metallic coinage materials on the current suppliers of coinage materials; the acceptability of new metallic coinage materials, including physical, chemical, metallurgical and technical characteristics; metallic material, fabrication, minting, and distribution costs; metallic material availability and sources of raw metals; coinability; durability; sorting, handling, packaging and vending machines; appearance; risks to the environment and public safety; resistance to counterfeiting; commercial and public acceptance; and any other factors considered to be appropriate and in the public interest.

Public comments must be submitted on or before April 4, 2011 to:

The research and development activities that will be conducted by the United States Mint may represent the first step to altering the compositions of circulating coins. As part of the biennial report required under the Act, recommendations may be made for specific changes in metallic content or coin production methodology. The ultimate authority to implement any of these recommendations will remain with Congress.

The composition of circulating coins has been the subject of more scrutiny as the prices of base metals have increased. The two smallest denominations are currently produced and distributed by the United States Mint at a loss. The one cent coin costs 1.79 cents to produce and distribute and generated a loss of $27.4 million in the most recent year, and the five cent coin cost 9.22 cents and generated a loss of $15.2 million.