The United States Mint has released the 2014 Eleanor Roosevelt First Spouse Gold Coin, which pays tribute to the longest serving First Lady of the United States. Eleanor Roosevelt held the post for more than 12 years from 1933 to 1945 during President Franklin D. Roosevelt’s four terms in office. Following her husband’s death, she remained active in politics as a delegate to the United Nations, the first chair of the UN Commission on Human Rights, and the chair of the John F. Kennedy administration’s Presidential Commission on the Statue of Women. 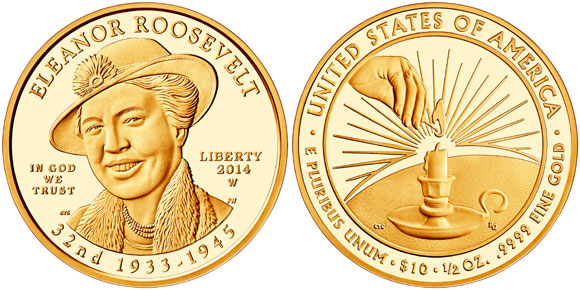 The obverse design of the coin features a portrait of the First Lady designed by Chris Costello and engraved by Phebe Hemphill. The inscriptions include “Eleanor Roosevelt”, the motto “In God We Trust”, “Liberty”, the date and mint mark “2014 W”, the order of the Presidency “32nd”, and the dates served “1933-1945”.

The reverse design carries a depiction of Mrs. Roosevelt’s right hand lighting a candle with the glowing light rising over a stylized graphic of the Earth’s curved horizon. This is intended to symbolize her life’s work and the global impact of her humanitarian activities. After Mrs. Roosevelt’s death, Adlai Stevenson had remarked, “She would rather light a candle than curse the darkness, and her glow has warmed the world.”  The reverse was designed by Chris Costello and engraved by Renata Gordon.

Each coin is struck in one-half ounce of .9999 24 karat gold and available in proof or uncirculated qualities. The coins have a diameter of 26.50 mm and thickness of 1.88 mm.

A maximum mintage of 10,000 has been established across proof and uncirculated versions. The ratio of proof to uncirculated coins will be determined based on customer demand.

The coins are initially priced at $820 for the uncirculated version and $840 for the proof version. The pricing is based on the average weekly market price of gold and may be subject to potential weekly change throughout the course of the offering.