On April 25, 2013, the United States Mint released the 2013 America the Beautiful Quarters Uncirculated Coin Set. This product includes examples of the sixteenth to twentieth releases of the series, which features a national park or site from each state, territory, and the District of Columbia. 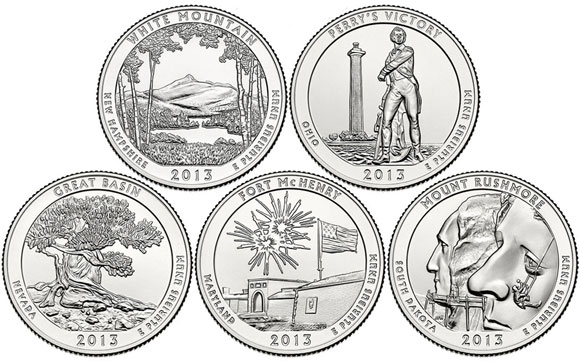 Each 10-coin set includes uncirculated examples from the Philadelphia and Denver Mint for each of the following quarters:

An image or scene representing each site appears on the reverse design of the quarter. The obverse of each quarter contains the 1932 portrait of George Washington designed by John Flanagan.

The ten coins are packaged in a folder containing illustrations of each site on the front, along with information about each site and coin specifications inside.

Pricing is set at $12.95 each, plus applicable shipping and handling. Orders may be placed online at http://catalog.usmint.gov/