Most coins I puchase  because I am collecting or assembling a series or to add to my core collection of traditional products. I also like to buy coins that I both enjoy and believe have a good chance to increase in value over the medium to long term. This post will describe the US Mint products that I have recently purchased which fall into the latter category and the reasons why I believe the products might appreciate in the future. I have been purchasing at least one of each of the First Spouse Gold Coins, usually managing to time my purchases during periods when the US Mint’s gold coin prices are low.  I have been accumulating gold in other forms, but I also like the extra potential premiums that could develop for low mintage coins.

Despite the popularity of the first three issues of the series, First Spouse Coins have fallen from most collectors radar screens. Some are unimpressed with the designs or the format of the series, or are turned off by the high prices or high premiums above spot gold. Eventually these factors may work in favor of the series on the secondary market.

Historically, some of the US Mint’s most unpopular products have turned out to be the biggest winners for the collectors who purchased them. Once sales of the coins officially end at the US Mint, the reasons for the initial unpopularity are often cast aside in favor of the new allure are a rare, low mintage coin.

There are numerous examples from modern commemorative coins. The 1995 to 1996 Olympic Commemorative Coins experienced a lot of collector backlash due to the over saturation caused by the sixteen different issues of the program. Most of these coins now trade at significant premiums to the issue price. The 1997-W Uncirculated Jackie Robinson Gold Commemorative sold a scant 5,174 coins when available from the Mint. The coins now fetch several thousand dollars each, compared to the original individual issue price of $180. 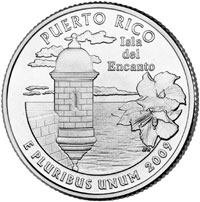 I have been purchasing Two Roll Sets for each of the 2009 US Territories Quarters, motivated primarily by the low mintages of the coins. The latest release featuring American Samoa had a combined mintage of 82,200,000 coins, made up of 39,600,000 Denver minted coins and 42,600,000 Philadelphia coins. Combined or individually, mintages for an individual quarter have not been this low for several decades.

The mintages for the Territories Quarters also pale in comparison to every release in the prior State Quarter series. Eight different releases for the series had combined mintages in excess of one billion coins. Even the lowest mintage State Quarter had a combined mintage of just over 400 million, which is still about five times the level of some of the current Territories Quarters.

One potential drawback of the US Territories Quarters is that a large portion of the mintages are being retained by collectors. This is facilitated by the fact that the US Mint sells the coins directly in bags and rolls. Taking the recently released Guam Quarter as an example, the US Mint sold 38,231 Two Roll Sets, 25,349 100-Coin Bags, and 2,821 1000-coin bags. These sales represent about 8.4 million quarters or nearly 10% of the total mintage. In the past, the values of some would-be key dates were kept low because of the large number of coins available due to hoarding. 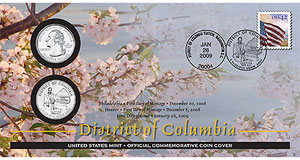 I always had the impression that the US Mint’s Coin Covers were overpriced and did not purchase any of these products in the past. Numerous comments on Mint News Blog slowly changed my perception of the coin covers released this year.

For the 2009 Quarters, the US Mint has redesigned the covers to have colorful photographs from the territory represented. This actually makes them more enjoyable as a collectible. Second, the US Mint has lowered the number of coin covers that can be produced. The latest release for American Samoa has a maximum production of only 20,000 covers. Third, the US Mint has been shortening the availability period for the products. In the past, some products would linger in their catalog until the maximum production was sold. Now, products come and go in much shorter time frames.

While the products do have a low intrinsic value of 50 cents per cover compared to the issue price of $14.95, there is definitely a sizable audience that collects and appreciates these products. Most of the prior 50 State Quarters Coin Covers have retained their value and in some cases prices for the less available covers have risen dramatically.

This year I am willing to give the product a chance as a low production, unique US Mint product that in the worst case will display well in my collection.

What US Mint products are you buying right now? Coin Update News invites other collectors to share views on their current favorite products and their reasons for purchasing them. To contribute an article to this series, please contact us via the Contributors Page.