I am purchasing First Spouse ten dollar gold pieces and the Silver Proof Sets from the U.S. Mint. Other base-metal products do not seem to hold their value.

Believe it or not, I am also assembling a set of Presidential Dollars in PCGS holders. Many of these can be obtained for below cost on E-Bay (cost of coin plus cost of sending it in to PCGS for grading and encapsulation).

Why am I doing this? I don’t know — I just started collecting them through force of habit and one thing led to another. 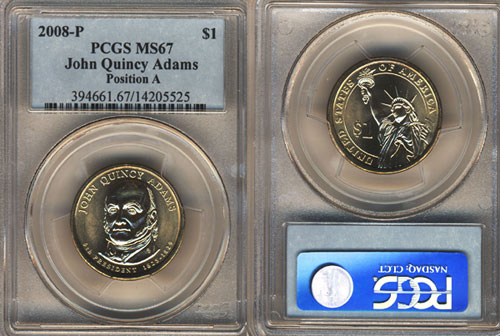 As it turns out, to collect a complete set of each president requires the acquisition of nine coins: P and D, positions “A” and “B” for each mint in circulation strikes (4 coins), same thing for the “matte finish” strikes in the mint sets (graded on a numerical “SP” scale for “specimen quality” by PCGS) (4 coins), and one proof coin. If you add the First Spouse Bronze Medal, it makes ten. The nine-coin requirement goes for the Sacagawea “Native American” Dollar as well.

The Presidential Dollars share many attributes of coins which have become valuable over time in the past. They are EXTREMELY unpopular, resulting in mintages that are steadily dropping (same thing goes for the First Spouse series), meaning few will be saved in decent condition. (On the other hand, to the extent they go back to the banks, the banks will either keep and preserve them in decent condition or return them to the Fed for what? remelting? — potentially resulting in a large supply for years to come.) Presidential Dollars preserve poorly and show mishandling easily, which means it will become difficult to get quality coins in the higher grades. (Ever try to get a really good quality circulation strike 1965-67 quarter or dime? It’s not as easy as it should be, given the extremely high mintages).

At the end of this whole thing, I expect to have an impressive set of Golden Dollars, starting with the 2000 PDS Sacagaweas, and progressing through all the permutations and proliferations of the series as it has evolved over time. As the series develops, there could emerge some interesting varieties (for example, the “no edge lettering” and “weak edge lettering” varieties).

Editors Note: This is the second in an ongoing series of articles that explore the perspectives of different authors on the same topic. Each author will share his or her views on which US Mint products are their current favorites and their reasons for purchasing them. New contributors are invited to express their views. Visit the contributors page for more details.