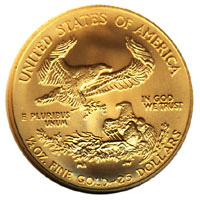 The United States Mint has reportedly begun production of 2010-dated American Gold Eagle bullion coins in fractional weights. The one ounce version of the coin was first available earlier this year on January 19, 2010.

Each year since 1986, the United States Mint has produced a range of fractional weight gold bullion coins to accommodate different investment levels. In 2009, the release of the fractional Gold Eagles had been delayed until December 3, 2009, as the US Mint dedicated their resources to producing the larger one ounce size coins.

A release date for the fractional weight 2010 Gold Eagles has not yet been announced. Like other bullion coin offerings of the United States Mint, the coins will be distributed through their network of authorized purchasers.