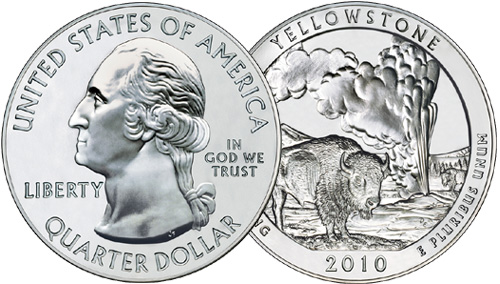 Sales will officially begin on May 17, 2011 at 12:00 Noon ET. The coins will be priced at $279.95 and have a maximum mintage of 27,000. There will be an ordering limit of one per household in place for at least the first seven days of sales. The US Mint cautions that pricing is subject to change based precious metals pricing.

The same pricing, maximum mintage, and ordering limits were in place for the first numismatic release featuring Hot Springs National Park. When sales began on April 28, 2011, initial demand was so great that it took down the US Mint’s website for 45 minutes. After nine hours of sales, customers had ordered more than 19,000 of the coins.

Although the Hot Springs National Park Five Ounce Uncirculated Silver Coin still remains available for sale on the US Mint’s website, there are indications that sales are extremely close to reaching the 27,000 maximum mintage.

The numismatic versions for the America the Beautiful Five Ounce Silver Coins feature an uncirculated finish and carry the “P” mint mark. The coins are sold directly by the United States Mint. The bullion versions of the coin, which were first made available late last year, feature a different finish, lack the mint mark, and are distributed through the US Mint’s network of authorized purchasers.

The Yellowstone National Park Five Ounce Silver Uncirculated Coin features an image of the Old Faithful geyser erupting with a bison in the foreground, as designed by Don Everhart. The obverse of the coin includes a portrait of George Washington designed by Johnson Flanagan.