Sales of the 2011 United States Mint Silver Proof Set began today, January 25, 2011. The dime, quarters, and half dollar included in this annual set are struck in a special composition of 90% silver. 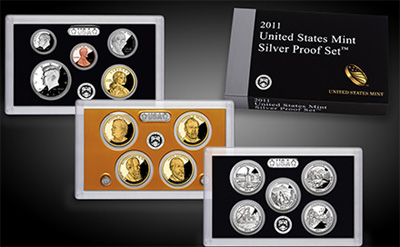 The current product represents the second annual set released during 2011. In an effort to make their most popular products available through the entire calendar year, the US Mint is releasing their core annual set in January and early February.

All fourteen coins are struck at the San Francisco Mint and bear the “S” mint mark. The proof coins are extraordinarily brilliant, with sharp relief, and mirrored fields. The sculpted foregrounds appear frosted to create a cameo effect.