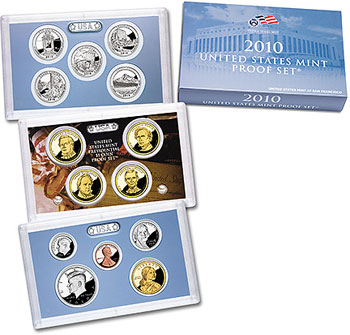 One of the highlights of the 2010 Proof Set is the first five coins for the new America the Beautiful Quarters Program. This new series will feature a National Park or national site in each of the 50 states, 5 U.S. territories, and the District of Columbia. The new designs will be issued at a rate of five per year, with a final design released in 2021.

The 14 coins of the set are struck at the San Francisco Mint and carry the “S” mint mark. The coins are packaged in three separate plastic lenses, placed within an illustrated cardboard box with certificate of authenticity. The 2010 Proof Sets are priced at $31.95 each and may be ordered online at http://usmint.gov/catalog

The United States Mint has offered the Proof Set annually since 1968, as well as prior years with some interruption. Together with the Mint Set, these products represent the US Mint’s most popular annual sets. The 2010 Mint Set recently went on sale July 15, 2010.