Today, October 15, 2009 at 12:00 Noon ET, the United States Mint will begin sales of the Lincoln Coin and Chronicles Set. Collectors have been eagerly awaiting the release of the set, and a prompt sell out is expected. 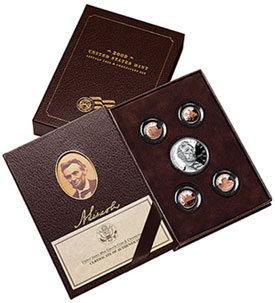 The Lincoln Commemorative Silver Dollars were offered for sale individually, earlier in the year. Across all product options the coins were subject to a maximum authorized mintage of 500,000 coins. The obverse of the coin depicts a portrait of Abraham Lincoln based on a Daniel Chester portrait which resides in teh Lincoln Memorial. The reverse of the coin features the closing words of the Gettysburg Address. The obverse was designed by Justin Kunz and sculpted by Don Everhart, and the reverse was designed and sculpted by Phebe Hemphill.

The 2009 Lincoln Cents issued this year feature four different reverse designs representing the stages of Abrham Lincoln’s life. The designs feature his birthplace and childhood in Kentucky, his formative years years in Indiana, his professional life in Illinois, and his presidency in Washington, D.C. The obverse of each coin features the original portrait of Lincoln designed by Victor D. Brenner, which has graced the coin for one hundred years. The proof coins included in the set are struck with a special composition of 95% copper, 3% zinc, and 2% tin. This matches the composition of the original 1909 Lincoln Cent.

The United States Mint has limited the set to a maximum production of 50,000 units, priced at $55.95 each. Due to the expected high demand for the set, an ordering limit of one set per household will be in effect for the first 30 days of sales.