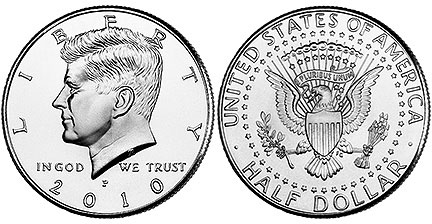 The obverse of the Kennedy Half Dollar depicts a bust of President John F. Kennedy designed by Gilroy Roberts. The reverse of the coin features the Presidential Coat of Arms as designed by Frank Gasparro. This design has been used for the half dollar since 1964, with the exception of 1976 when a special Bicentennial reverse design was used.

The US Mint also offers a 200-coin bag of 2010 Kennedy Halves. This bag contains 100 coins from each Mint facility. The canvas bags are sewn at the top and indicate the contents. The bags are priced at $130.95 each.

Later in the year, collectible versions of the 2010 Kennedy Half will also be issued in several of the United States Mint’s annual coin sets.