Today September 2, 2010, the United States Mint began sales of the 2010 James Buchanan’s Liberty First Spouse Gold Coins and bronze medals, which feature the same design. Because Buchanan served in office without a spouse, the coin and medal carry a depiction of Liberty taken from a circulating coin of the era paired with an image from his life. 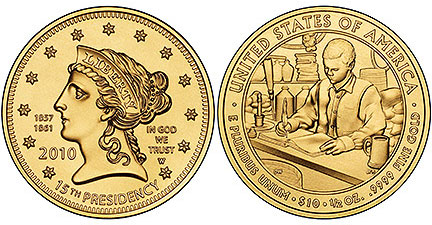 The obverse design of the coin is a reproduction of the Liberty Head Quarter Eagle, designed by Christian Gobrecht. The $2.50 gold coins were minted and issued for circulation from 1840 to 1907. Obverse inscriptions indicate the order of the Presidency, the dates of the term, the current date “2010”, and the motto “In God We Trust”.

The reverse features a depiction of a young James Buchanan at work as a bookkeeper in his family’s store. Surrounding inscriptions indicate the legal tender face value, bullion weight and purity, “United States of America”, and the motto “E Pluribus Unum”.

Each Buchanan’s Liberty Gold Coin contains one-half ounce of 24 karat gold. Coins are produced at the West Point Mint in both uncirculated and proof versions. The issue carries a maximum mintage of 15,000 across both versions.

The bronze medal duplicate measures 1 and 5/16 inches and is struck at the Philadelphia Mint. A maximum mintage is not specified for the medal.

Current pricing for the offerings are $766 for the uncirculated gold coin, $779 for the proof gold coin, and $5.50 for the bronze medals. There are no household ordering limits in place for any of these products. Prices for the gold coins may be adjusted by the United States Mint weekly in response to changes in the average price of gold.

The James Buchanan’s Liberty First Spouse Gold Coin represents the sixteenth overall release in the broader series which honors the First Ladies of the United States. The next release of the series will feature Mary Todd Lincoln and is expected to go on sale December 3, 2010.