Today, July 28, 2009, sales of the Guam Quarter First Day Coin Cover began at the United States Mint. This will mark the third coin cover released in the series featuring each of the six coins of the 2009 District of Columbia & U.S. Territories Quarters Program. 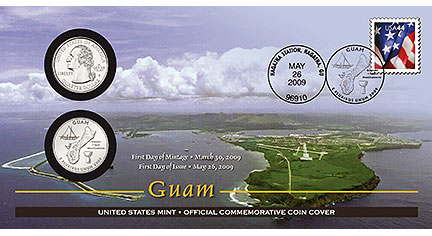 Each coin cover includes two Guam Quarters produced on the first day of mintage. They are mounted on a display card inside an envelope with a 44-cent Flag stamp. The post mark is May 26, 2009, Hagatna, GU, the first day Guam quarters were released to the public. The product has a maximum production of 25,000 units and is priced at $14.95 plus applicable shipping and handling charges.

The Guam Quarter reverse depicts an outline of hte island, a flying proa (sailing vessel), and latte stone (architectural support of homes). The inscriptions include Guahan I Tanó ManChamorro (“Guam – Land of the Chamorro”). The reverse was designed by David Westwood and sculpted by Jim Licaretz.