The United States Mint has started accepting orders for the 2013-W Uncirculated American Silver Eagle. This represents one of several collector versions offered this year for the popular one ounce silver bullion series. 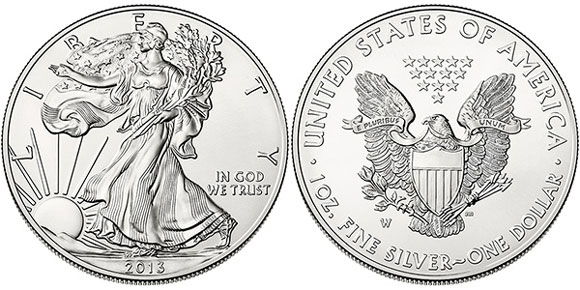 The obverse of the American Silver Eagle features Adolph A. Weinman’s classic Walking Liberty design, which appeared on the circulating half dollars minted from 1916 to 1947. The reverse design of the coin features a heraldic eagle designed by John Mercanti, which has been used for each year of the bullion and collector series since its launch in 1986. Each coin is struck in .999 fine silver with a weight of 1 troy ounce.

Previously this year, the US Mint has released the Silver Eagle in bullion format. These coins do not carry a mint mark and are distributed through a network of authorized purchasers based on the market value of silver plus a fixed mark up. Collector versions of the coin for this year have included the individual proof coin with “W” mint mark, released on January 24, 2013, as well as a West Point Two Coin Set, containing coins with reverse proof and enhanced uncirculated finishes. The special set is available to order during a four week window and is expected to begin shipping in late June.

The 2013-W Uncirculated Silver Eagle represents a collectible uncirculated version of the coin struck on specially burnished blanks and carrying the “W” mint mark. The coins are sold individually boxed, with a certificate of authenticity.

Pricing is established at $48.95 per coin. There is no stated maximum mintage, and there are no household ordering limits are in place. Orders may be placed online at http://catalog.usmint.gov.