On December 20, 2011, the United States Mint began accepting orders for the 2011 America the Beautiful Quarters Three Coin Set featuring the Chickasaw National Recreation Area Quarters. Similar sets have been released for all previous coins in the series.

The reverse design of the Chickasaw Quarter features a depiction of Lincoln Bridge, the first constructed improvement to the area. The limestone bridge was dedicated in 1909 to celebrate the 100th anniversary of the birth of Abraham Lincoln. The reverse was designed by Donna Weaver and sculpted by Jim Licaretz. The obverse of the coin contains the 1932 portrait of George Washington by John Flanagan. 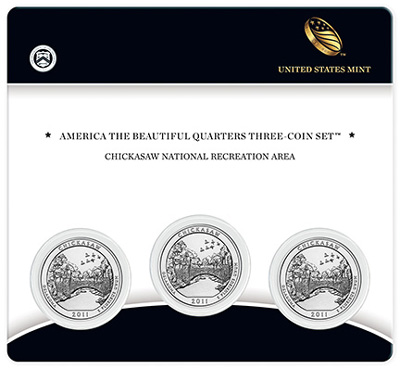 The sets are priced at $14.95 and available online at http://catalog.usmint.gov.

The America the Beautiful Quarters Program will feature 56 different reverse designs issued from 2010 to 2021 representing national parks or sites from each state, territory, and the District of Columbia.