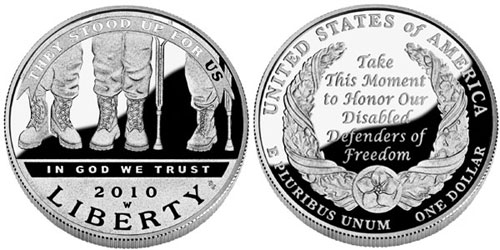 The obverse of the 2010 American Veterans Disabled for Life Silver Dollar was designed and sculpted by Don Everhart. The obverse features and image of the legs and boots of three veterans. An inscription above reads, “They Stood Up for Us.” The reverse of the coin, designed by Thomas Cleveland and engraved by Joseph Menna, features a wreath composed of oak branches and leaves, with a ribbon intertwined and a forget-me-not flower at the base. A central inscription reads, “Take This Moment to Honor Our Disabled Defenders of Freedom.” The designs were unveiled on August 22, 2009.

The coins are struck in 90% silver and available in either proof or uncirculated versions. Under the authorizing legislation, a maximum of 350,000 coins may be issued across available product options. All coins are minted at the West Point Mint facility and bear the “W” mint mark.

As specified in the authorizing legislation, the price of each silver dollar includes a surcharge of $10. These surcharges will be distributed to the Disabled Veterans’ LIFE Memorial Foundation for the purpose of establishing an endowment for the construction of a memorial in Washington, DC.

A second United States Mint commemorative coin program for 2010 authorizes the issuance of the 2010 Boy Scouts of American Centennial Silver Dollar. These coins are expected to be release on March 23, 2010.