After nearly a year of uncertainty, the remaining details of the 2009 American Gold Buffalo coin offerings from the United States Mint have been revealed. The bullion version of the coin went on sale last week, and the collectible proof version of the coin will go on sale before the end of the month. 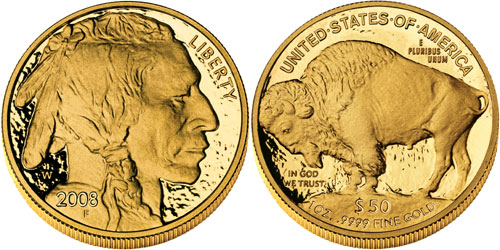 The American Gold Buffalo Coin is a 24 karat gold bullion and collector coin. It has been issued by the United States Mint since 2006. The design of the coin is based on James Earle Fraser’s 1913 Type 1 Buffalo Nickel. The obverse features the profile of a Native American chief and the reverse portrays an American Bison.

The bullion version of the coin went on sale October 15, 2009. As with other bullion offerings, the US Mint does not sell the coins directly to the public. Rather, the coins  are sold to a group of Authorized Purchasers, who then resell the coins to other dealers and the public. The bullion coins are usually priced at a set mark up to the spot price of gold. As of October 22, 2009, the US Mint has sold 86,000 of the one ounce bullion coins. This compares to total sales of 172,000 coins for all of 2008.

The proof version of the coin will go on sale October 29, 2009. The coins will be available for ordering starting at 12:00 Noon ET directly from the United States Mint via their website or toll free number 1-800-USA-MINT.  The one ounce proof coins will be housed in a hardwood box with a matte finish and faux leather inset. A certificate of authenticity signed by the Director of the United States Mint will accompany each coin. Pricing will be determined based on the average weekly price of gold. If gold remains within its current price range, the coins would have a price of $1,360.00.

The proof coins will be offered without a household ordering limit and without a maximum authorized mintage.