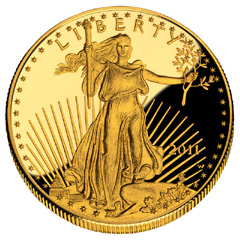 The United States Mint reported a jump in numismatic program revenue for the fiscal year ending September 30, 2011, driven by the sales of both 2010 and 2011-dated numismatic American Gold and Silver Eagles. Overall revenue rose by 74.70% to a record $721.7 million, while net income and seigniorage jumped by 127.31% to $113.2 million.

The US Mint manufactures high-quality versions of circulating coinage, numismatic precious metals coins, commemorative coins, and medals, which are offered for sale directly to the public. Some of the products are required by federal statute, others are required by individual public laws, and others are at the discretion of the Secretary of the Treasury. A main objective of the numismatic program is to increase the customer base and foster sales, while controlling costs to keep prices as low as practicable. In the past, the US Mint has indicated that the program is managed to a net margin at or below 15%.

Numismatic program revenue increased dramatically during the fiscal year, reversing two consecutive years of declines. During FY2009 and FY2010, sales had been hindered by the cancellation and delay of numismatic versions of the American Gold and Silver Eagle coins. In response to high demand for bullion versions of the coins, the US Mint had diverted supplies of precious metals blanks from numismatic products to bullion. After locating additional suppliers of previous metals blanks, production of numismatic versions of the coins was resumed. Both the 2010 and 2011-dated versions were released during the 2011 fiscal year.

Net income and seigniorage from the numismatic program rose to $113.2 million, more than doubling from the previous year. The increase was attributable to the growth in sales revenue and the shift towards higher margin precious metals products.

The breakdown in numismatic revenue by category reveals an increase in sales of 20.58% for recurring products, which reached $231.4 million. This category includes the US Mint’s core annual set offerings such as the Proof Set, Silver Proof Set, and Uncirculated Mint Set. The category also seems to include the newly launched America the Beautiful Five Ounce Silver Uncirculated Coins. The revenue attributable to the new product appears to be responsible for much of the increase for the category.

Revenue generated from the numismatic version of the American Gold Buffalo coins fell by 46.54%, primarily due to the timing of releases. During the 2010 fiscal year, both the 2009 and 2010-dated one ounce proof coins were released, accounting for the much higher revenue by comparison

Revenue from the numismatic sales of circulating coins continues to fall. These products include circulating-quality quarters, half dollars, and $1 coins that are packaged in custom designed wrappers or canvas bags and sold at a premium to face value.  This segment has shown consecutive annual declines since reaching a peak of $36.1 million in the 2007 fiscal year.