As the market price of gold has vaulted higher, the United States Mint has increased the prices of numismatic gold products. Pricing changes were implemented on July 20, July 27, August 10, and August 17, with the aggregate impact of making coins $250 more expensive for each ounce of gold content. 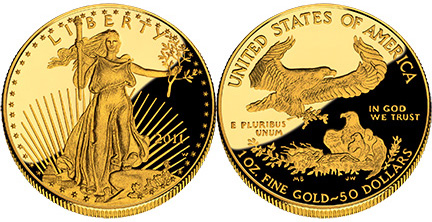 The US Mint uses a flexible pricing policy for the numismatic versions of the American Gold Eagle, American Gold Buffalo, and First Spouse Gold Coins that allows pricing changes to be made as frequently as weekly based on changes in the market price of gold. The average London Fix price from the previous Thursday AM to the current Wednesday AM is calculated. If the average moves into a different $50 increment and the Wednesday PM price agrees directionally, then product prices are adjusted. In the event that the market price of gold moves rapidly higher, the US Mint does reserve the right to suspend sales until an adjustment can be made. Such a suspension occurred early last week.

In addition to the recent increases, earlier in the year price increases occurred on February 16, March 2, April 13, April 27, and May 25. A price decrease took place on May 18.

Separately, the US Mint has suspended sales of the available 2011 gold commemorative coins, which contain 0.24187 troy ounces of gold. These offerings include proof or uncirculated gold coins for programs honoring the United States Army and the Medal of Honor and its recipients. These products were not covered by the US Mint’s flexible pricing policy, so up until the suspension, the prices implemented earlier in the year of $444.95 for each uncirculated coin and $454.95 for each proof coin had remained in effect. The US Mint is currently developing a pricing grid, which will allow prices to be adjusted in similar fashion to other numismatic gold products. 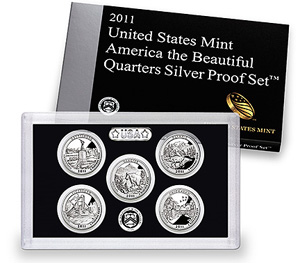 There is a looming threat of suspension for certain numismatic products with silver content, such as the annual Silver Proof Sets and the America the Beautiful Quarters Silver Proof Sets. When the price of silver moved quickly higher earlier this year, these products were suspended, repriced, and suspended again. The second suspension came as silver rose above $40 per ounce (2010 sets) and $43 per ounce (2011 sets). After the price of silver retreated, sales were resumed without any price change. Each annual set contains 1.33823 troy ounces of silver plus face value of $5.06 for the other coins included in the set. Each ATB Quarter Silver Proof Set contains 0.9042 troy ounces of silver.

Current prices for the annual sets containing silver coins are shown below.