On June 14, 2011, the United States Mint held an official launch ceremony to mark the release of the Olympic National Park Quarter. This coin represents the eighth release in the ongoing America the Beautiful Quarters Program, featuring national parks and sites from across the country.

The ceremony was held at City Pier in Port Angeles, Washington. Attendees included B.B. Craig, United States Mint Associate Director for Sales and Marketing, Washington’s First Gentleman Mike Gregoire, Vanessa Fuller of the Port Angeles Chamber of Commerce, and Karen Gustin, Olympic National Park Superintendent.  The ceremony was open to the public and many local school children were in attendance. 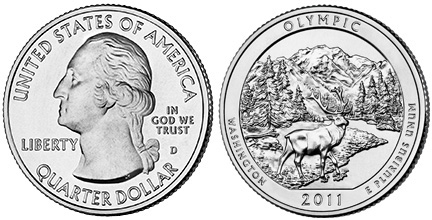 The reverse design of the Olympic National Park Quarter features a Roosevelt elk stepping onto a gravel bar of the Hoh River with Mount Olympus visible in the background. The desire to protect the Roosevelt elk was one of the primary drivers for establishing Mount Olympus National Monument, which would later become Olympic National Park. The obverse of the coin features a portrait of George Washington, restored from the original 1932 portrait by John Flanagan.

The official circulation release date for the quarters took place on June 13, 2011. The same day, at 12:00 Noon ET, the US Mint began sales of numismatic bags and rolls of the coins. The 25-coin rolls or 100-coin bags are available from either the Philadelphia or Denver Mint facility. Each is presented in special packaging which contains the US Mint logo and an indication of the face value, mint mark, and park name. The rolls are priced at $39.95 and the bags are priced at $49.95 each. These may be purchased online at http://catalog.usmint.gov/

Several weeks earlier on May 23, 2011, the US Mint had released five ounce silver bullion coins featuring Olympic National Park. These were distributed through the Mint’s network of authorized purchasers and are generally available for prices based on the market price of the precious metals content plus a mark up.